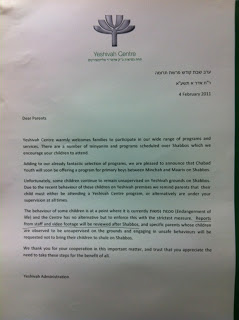 A bizarre new sign went up in Yeshivah Shul this week

The letter welcomes families to participate in the shul’s programs and services, and introduces a new children’s program. It then warns quite ominously: “Unfortunately, some children continue to remain unsupervised on Yeshivah grounds on Shabbos … we remind parents that their child must either be attending a program or under your supervision … The behaviour of some children .. is sakonas nefoshos … Reports from staff and video footage will be reviewed after Shabbos … parents whose children are observed to be unsupervised … and engaging in unsafe behaviours will be requested not to bring their children …”

This is quite astounding. It looks like that Government stimulus money that has been used to build new fences, and install a remote-controlled boom gate complete with bollocks, has also gone to put in a sophisticated surveillance system to help stamp out “unsafe behaviours”.

Quite aside from the fact that this directive aims to stamp out kids playing (unsupervised) in any of the many playgrounds and play spaces around the Yeshivah campus, the fact that “video footage will be reviewed after Shabbos” is quite intriguing.

This is surely inspired by the AFL Match Review Panel, an important part of the AFL Tribunal, which reviews video footage after each weekend, looking for infringements. It’s great to see how the Yeshivah has learnt from other disciplines in dealing with and preventing “unsafe behaviours”:

As in the AFL, Yeshivah will introduce a points system: 100 points means you are suspended from attening shul for one week, a 25% discount is given for an early plea of guilty. Charges can apply to both parents and children as appropriate. For example:

This is only the tip of the iceberg. As we know, cameras are also installed inside the main shul. We will soon see the introduction of the Shul Conduct Review Panel, which will view all footage every motzei Shabbos. They will consider whether a mispallel is to be charged with a reportable offence, taking into account three factors:

This gives rise to a whole host of other “unsafe behaviours”:

There are rumours of the introduction of a “bringing the Shul into disrepute” offence, that carries a 500 point charge, but these have been dismissed, as many members and officers of the organization could find themlseves subjected to this charge.