The Menorah is one of the most enduring Jewish symbols we have – instantly recognizable, and adopted as part of the emblem of the state of Israel. The menorah lit in ancient times was symbolic of the Temple, and Judaism, being a source of light to the entire world. Facebook friends are posting many moving photos of Chanukah celebrated after WW2 and in other dark times – a much-needed source of light and inspiration. 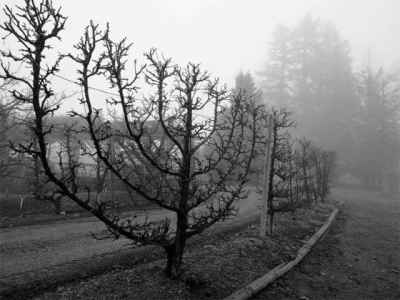 Here’s another take on the classic menorah shape, which has a base, and branches that spread outward. It resembles a tree, which has firm roots and a trunk as its foundation, without which it would be quickly uprooted in a storm. Unlike another tree symbol popular at this time of year, the menorah is more of an inverted triangle (according to Maimonides) or semi-circle. The branches go up and out.
A big tree has an extensive root system hidden deep into the ground – sometimes so deep anyone walking past could admire the beauty of the tree but be oblivious to what it stands upon. With this foundation and a strong trunk, it is able to support branches that go in all directions – branches that spout forth other branches, branches that have leaves and fruit. If it wasn’t for their connection to the trunk, the branches would just fall away and be lost forever. Such a tree can endure for many generations, going through cycle after cycle of harsh winters that appear to strip it bare, then bouncing back again each spring to bloom.
So it’s quite appropriate that the menorah/tree is a symbol of Chanukah and of Judaism. The Maccabees fought and won a battle for the spiritual nature of Judaism in the face of a threat from the Hellenist culture of the time. The Hellenists wanted to disconnect Judaism from its roots – from God and spirituality – and to leave just the “culture”. Such a move would be the death-knell for thousands of years of tradition.
The survival of Judaism for this long is only because our connection to the roots – which remain buried so deep in history people deny their existence – is so strong.
The branches of Judaism are many and varied: we have spread all over the world with a diversity of customs and observances. The contemporary generation have a natural rejection of existing Jewish institutions and search for new ways to express their Jewishness. The metaphor of the tree tells us that it’s fine to question, to seek new expressions and adaptations, subject to just one condition: we must remain connected to the roots.
Houses can be renovated, reformed or even reconstructed. With a process like this, you can end up with something completely different from what you started with. And if you weren’t happy with that house, you’d reconstruct it some more. But in doing so, any semblance of the original house would be long gone. Not so a tree – anyone can prune back the branches even with the most malicious intent but if the roots are strong, the same tree will grow back.
The story of the tree is the story of the Jewish nation. For thousands of years, our branches have grown and been pruned, grown and been pruned. We have survived bitter winters followed by beautiful springs and summers. Only by maintaining the connection to our roots, we will be robust to adversity and continue to endure. That is the message of Chanukah – “Etz chaim hi” – it [the Torah] is a tree of life to those who grasp her.
Happy Chanukah.

This article was also published on Galus Australis and J-Wire. Also see this related article on Times of Israel.