For years he sat quietly in his seat in shul – week-in, week-out – like a permanent fixture. He was many things to many people. To most, he was Mr Raitman, soft-spoken elder and stalwart of the Yeshivah community. A man respected by all, with never an ill word about another. Straight as the day is long, and discreet to the maximum, he was the embodiment of the pasuk: “hatzneah leches im Elokecho”, that we should walk modestly with God (Micha 6:8). 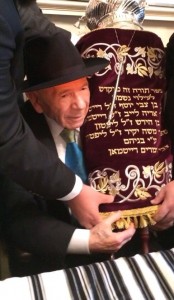 Harry Raitman and his Sefer Torah

To the children, he was The Pretzel Man, a more advanced and refined version of the shul ‘Lolly Man’ and not anything like the ‘Fizzer Man’. With the moniker proudly emblazoned on his tallis bag, he wanted to give the children a treat, but not something that was bad for their teeth or would lead to them running around the shul grounds on a sugar-high. That said a lot about him as a person.

To some, myself included, he was ‘Uncle Harry’. We were neighbours for some sixteen years, and our shared passion for the Richmond football club continued for many years. He was always there with a broad smile when we won, and more often (when we lost) a gentle grin, a glint in his eye, and something philosophical to say.

As the years progressed, although it became more difficult, he continued to come to shul whenever possible. It was no easy feat for him to make the effort to get to shul, yet it was the highlight of his week, but you would not know it by looking at him. He was the same Uncle Harry from start to finish.

Earlier this year, in honour of his 90th birthday, he had the zchus to donate a Sefer Torah to the Young Yeshivah Minyan in honour of his and his wife’s parents.  It was a fitting bridge between his generation and the Gen Ys that are our future. The joy on his face as he ascended the Yeshivah shul stairs holding the precious Sefer Torah, was unimaginable. The other Sforim were there to greet him and welcome a new Sefer to our shul, and he was indefatigable, and brimming with pride.

Several months ago he moved to JewishCare’s Gary Smorgon House, where he thoroughly enjoyed the Yiddishe environment whilst reconnecting with many childhood friends from his days in Carlton.

Uncle Harry passed away peacefully on 6 Elul 5775. The parsha reading for that day declared that man is like a tree in the field. A tree does not exist in a vacuum; it is part of an ecosystem that is constantly changing. The tree is nurtured from the air, the sun and the rain, and from the ground via its roots. So it is with a family and a community. As the leaves of his family tree continue to grow and become branches, Harry has left this world and assumed his place in the spiritual foundation of his family and our community.

Even during the Shabbos of shiva, his kapital tehillim – 91 – held a special significance for his family. They knew that he was on high, continuing to look out for those closest to his heart. May his memory be a blessing.

Tweets by davidwerdiger
Family Governance; Owner or Management When famil