As the reform process at the Yeshivah Centre continues, the term “safeguarding the Chabad ethos” has been bandied about quite a lot. But what does it mean? Some people have  blamed the “Chabad ethos” for the misdeeds of the past, particularly in the context of the Royal Commission into Institutional Responses to Child Sexual Abuse, but this is more often than not a misdirection which shows an anti-Chabad bias. Yet at the same time, I get the feeling that “safeguarding the Chabad ethos” has been an excuse behind which many things are justified, particularly with respect to maintaining a closed leadership structure and perpetuating control in the hands of the few. So what is this “Chabad ethos” that we are trying so hard to safeguard? 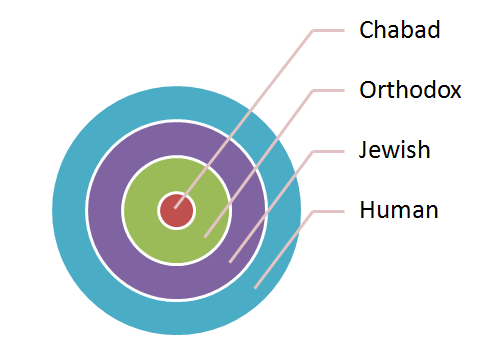 A more complex version of the diagram might show subsets of Jewish as Orthodox, Conservative, Reform etc, subsets of Orthodox as Chassidic, Yeshivish, Modern Orthodox and Religious Zionist, and subsets of Chassidic as Chabad, Ger, Belz etc. It starts to get complicated when you overlay ethnicity like Sefardi or Ashkenazi, and national(ist) identity. It gets even more complicated when you consider a person’s ancestry. Jewish identity is a complex thing.

These different layers of identity impact different aspects of our lives, and drive certain things we do or do not do. For example, if someone eats kosher, they may do so essentially because they are Jewish. But their specific level of kashrut observance may be linked to whether they are Orthodox or something else, Chabad or something else, etc. These more specific affiliations drive details pertaining to kashrut, but not the very reason we choose to eat kosher. This would apply to many observances: we do them essentially because we are Jewish, but the specifics of our observance (e.g. detailed practices or customs) relate to the more specific aspects or levels of our identity.

With this hierarchy in mind, one can then reasonably ask two important questions:

The answer to those questions will help us understand what this “Chabad ethos” is. We could, both as individuals as an organisation, look at everything we do, and determine which level in the hierarchy is the driver for that specific belief or practice. Here are just a few examples:

Many of these things are worth ‘safeguarding’ for an organisation like the Yeshivah Centre, but it’s important to recognize why we are safeguarding them. In some cases, it’s just a matter of complying with the law of the land, or adopting best practice for the industry. In other cases, they are the things that distinguish the Yeshivah from other communities and shuls.

It starts to get complicated when there are conflicts between beliefs and practices in one level of the hierarchy and another.  This can happen when we deal with issues where cultural aspects of the “Chabad ethos” (which means “the way things are commonly done in Chabad organisations”) overlap or clash with principles of good governance and best practice in operating a not-for-profit. At it’s core, this is about the nature of shlichus in the modern world. Is it reasonable for people to ‘inherit’ positions of authority and leadership? Do shlichus positions have life tenure? What defines a shliach (as opposed to another employee of the centre)? How can we performance manage staff? What is the scope of authority of a Rabbi? How do we avoid nepotism and conflict-of-interest? How do we resolve disputes within the community? For these conflicts, it is again helpful to break them down in terms of the identity hierarchy and then determine which level “wins”.

The answers to these questions have potential ramifications for Chabad organisations around the world who want to find the path toward better governance. The governance review panel should be mindful that the world is watching.

Then there are those aspects of the “Chabad ethos” that are intangible – the feel of the place. How do we safeguard that? It is not possible to enshrine the feel of an organisation in a constitution, or in policies and procedures. Any organisation needs “corporate memory” as a transmitter of culture, and in the same way, these intangible aspects are passed down from one generation to another. How many people at the Yeshivah remember the elter chassidim – the founding families who were sent to Melbourne in the late 1940s and on whose shoulders we all stand? Unfortunately, most of the people who do remember them are part of what has been dubbed “generation lost” and have been disenfranchised by years of frustration with the leadership (disclaimer: I’m part of that generation). There remains a deep level of distrust of the leadership and uncertainty about the direction forward. Given the history, the onus is on the current and future leaders to take steps to rebuild that trust.

Depending on which aspect you consider, the process of “safeguarding the Chabad ethos” is either relatively straightforward, has the potential to create disruptive waves of change that can spread across the Chabad world, or is largely irretrievable. In all cases, some deep introspection is needed, as well as a readiness to challenge some long-standing cultural norms.