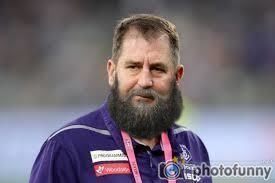 With the recent departure of their senior coach, it has been revealed that former Fremantle coach Ross Lyon is a “front and centre” contender for the top role at the Yeshivah Centre.

Following years of club turmoil and poor performance, the Yeshivah Centre engaged KPMG to undertake a comprehensive review of operations, and in an unusual move also requested a forensic examination of the club’s game plan over the last forty years. As one director explained, “In order to develop our game plan moving forward, we needed a deeper understanding of why things went off the rails so quickly after the glory years”.

That time, known within the club as “the glory years”, was a period of sustained excellence, with seven flags over twenty years. With a physically imposing leadership and a virtually immovable target in front of goal, the club was a powerhouse both on and off the field.

But as the KPMG report revealed, the game plan was based on tightly controlled possession of the agenda through precision kicking, with the bulk of players only needing to follow the example of the closed and tight-knit leadership group. When the opposition was able to score, it was against the run of play, and so below the radar that leadership were oblivious to what was slowly developing as a huge threat to the entire game plan.

When key players from that era retired, the absence of any succession plan, together with a lack of adaptation to changes to the way other teams were playing the game, led to the inevitable collapse of the system, the report found. Without strong leadership, the possession game plan fell apart. Opposition teams were quickly able to grab the agenda, and the game plan did not have a team-defence mindset that would be able to get it back. Without control of the agenda, things became even worse as club in-fighting was rampant. Factions within the club were at loggerheads over what defensive strategies would be effective to regain possession of the agenda, and opposition teams took advantage of the internal chaos to score heavily.

A very public spill of the board, followed by two periods of interim coaching were ineffective as the club remain in a state of deep disunity and dysfunction. It became evident that some key players retained loyalty to “the old ways” and were running their own private agendas. Others, recruited from other clubs to fill key senior team roles, initially had an impact, but with the passage of time became a source of deeper internal conflict. Parts of the old game plan were still there, so changes could not readily be adopted. On-field, when players were able to get back the agenda, they quickly gave it up with poor disposal. For three years running, the club had the dubious honour of leading the league in goals scored against following a kick-in. The report found that the problem was not just about skills, but went to issues of culture. Through all this, the club was also haemorrhaging cash, having committed to development of new facilities with the support of a Victorian state government grant, but with key sponsors withdrawing.

Only after a rewrite of the club constitution and fresh elections could the rebuild even start. With the coach staying on purely for continuity but knowing his days at the club were numbered, the new board took more of a leadership role. It started with recruiting, but they were well aware that until they could get 50 games into the new core group of players, they would still struggle to kick winning scores. The game plan became focused initially on avoiding the big, humiliating losses. They switched to a zone defence for two seasons until the younger players were ready to compete more effectively in one-on-one contests. It was not about winning games, but rather resetting the club foundation for long-term success. Sponsors started to realise that real change was happening, and some returned but remained sceptical.

The KPMG report also surveyed the fans, and found continued frustration and discontent. “My grandfather went for Yeshivah, my father did, and I continue to go to every game religiously, but sometimes I wonder why I keep going”, said one exasperated fan. Another third-generation fan said, “It seems to be the same old story every week. I’m old enough to remember the classic ‘shaarei shamayam psach speccy’ at the Grand Final and frankly don’t know where the next one might come from”.

In concluding, the report identified the key requirements of a sustainable game plan, and the attributes that should be sought in a senior coach. Without revealing club confidential details, one director commented: “The report has led to plenty of reflection by the board. We realise that the game has fundamentally changed, and that we can no longer assume we can play it on our terms, and certainly can’t always maintain possession of the agenda. With a young squad, we’ve been handballing too much from stoppages and unable to get to outside runners. Moving forward, when we do possess the agenda, we need to use it more cleanly and improve our disposal efficiency, particularly to aid our defensive transitions. We also need to be prepared to engage in the contest, where there has been reluctance in the past.”

The next senior coach will be able to implement the new game plan to take the club forward, according to one insider. “After years of turmoil, the best we can hope for in the next five years is mediocrity. On that basis, Ross Lyon is front and centre the obvious candidate for the role.”

Special thanks to two people who cannot be named for inspiring this article.