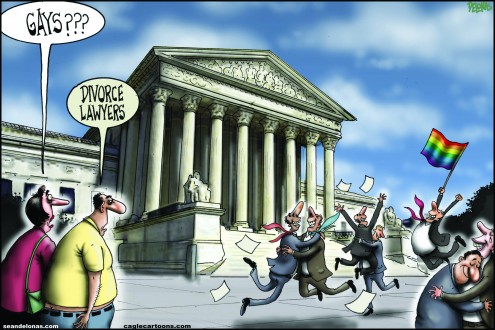 Disclaimer: some of these arguments regarding same-sex marriage are specific to Australia.

The same-sex marriage debate continues to hot up in Australia as the Liberal party stumbles around, torn from within and without. Plebecite? Postal vote? Parliamentary conscience vote? But all of this is a side-show to the core debate.

As a quick aside, it’s worth noting that anyone who uses the term ‘marriage equality’, rather than the neutral ‘same-sex marriage’, has made up their mind. After all, who could possibly be against ‘equality’, or against ‘equal rights’? But is this really an issue of equality? Is there such a thing as a ‘basic human right’ to get married? I think it’s more complex than that. As in many debates on big issues, the language and framing used is very important, and can itself shape the debate and therefore the outcome. Control the question; control the answer. When put to the people (as it would appear to be), the debate over the exact wording of the question can become very important.

One thing that has been largely absent in the debate is a reflection on our country’s history of couples’ rights. It’s worth recalling that just a few decades ago, Australia set an important legal precedent. In Australia in the 1970s, couples revolted against the institution of marriage. People were living together in committed long term relationships, but didn’t want to have the ceremony with the rings and all that. To the progressive couples of that time, marriage was a stuffy, old institution and they wanted no part of it. But, because they were living as a couple, they wanted the legal benefits and protections of being a couple, which included property rights, parental rights, social welfare rights, and so on.

The Australian government responded, and thus the Family Law Act 1975 formally recognised a ‘de facto relationship’ – where by virtue of living together for a period of time, a couple were ‘as good as’ married. Unlike marriage, there was no ceremony or process to indicate the official start of such a relationship, but once established, all the rights of married couples applied. There was also no formal divorce process, but couples did have rights with respect to property and children, and these needed to be reconciled/unwound just as when a married couple split up. De facto couples were, at law, the same as married, but we used a different word for them, because they were … different. Initially, some people considered de facto couples with disdain (“living in sin”), but with the passage of time, that form of relationship became more accepted, and the use of the gender-less term ‘partner’, rather than ‘husband’, ‘wife’, or even the gender-less ‘spouse’, has become more widespread.

This legislation established a ‘right’ of a couple to the legal benefits and obligations of couple-hood (or not to be discriminated against in respect of those rights because of their genders), irrespective of whether or not they are married. Over time, the rights of de facto couples (no matter the gender of the parties) continued to be extended, for example with the legalisation of access to adoption services and assisted reproductive technology (ART) for gay and lesbian couples. We can argue that those laws extended the ‘rights’ of couples even further. Notably, this all took place without the need to modify the Marriage Act.

Compared with other countries, Australia has been very progressive regarding the recognition of the rights of all types of couples.

This makes an interesting contrast to the same-sex marriage movement, where couples who are living together in committed long term relationships want something more – more than they already have under our laws. They want their relationship to be governed not by the laws of de facto relationships or civil unions, but by the laws of marriage.

Would such a change make a material difference to their rights as a couple? No. A civil union ceremony can have all the bells and whistles of a wedding, and we already have a legal construct that gives same-sex couples the same rights as married couples. And if there are still gaps between the two legal couple-hood constructs we already have, then by all means we can and should eliminate them. After all, our society has long ago accepted that there are different ways to have a committed long term relationship between two people.

So what is this really about?

But the words ‘marriage’, ‘husband’ and ‘wife’ have had well-defined meanings for thousands of years. They have strong connotations of gender, as well as of religion. What we would be essentially be doing is voting to change the meaning of words. And while the existence of legally married gay couples does not in any way impact the nature of my (or anyone’s) hetero marriage, it is reasonable to acknowledge that this significant social change can make some people uncomfortable.

Our society has progressed to the point where we recognise the legal rights implicit in a long term committed relationship between two people, regardless of their gender. We actually did this decades ago, so from a rights perspective, little is changing. What is being claimed is ‘the right to call a same-sex relationship marriage‘. Who decided that is a right? My view is that the various forms of long term committed relationships between two people: hetero or same-sex, married, de facto or civil unions, can reasonably have the same legal rights, yet they are still different.

Our society has progressed to legalising and then accepting non-marital committed relationships. That is progress – to accept the many different ways relationships can take place. One could argue (as Helen Razer does), that legalising same-sex marriage is actually a step backward. This issue is not a simple one that falls along conservative/progressive lines.

Being equal doesn’t mean every law must apply to every person, nor that we must change the meaning of words to make them generic and free of gender bias. Equality does not mean we are all the same. A diverse society respects difference, and that respect must go both ways. So if we do end up voting on this issue, it’s important to know what we are truly voting for: not a right, but social change.