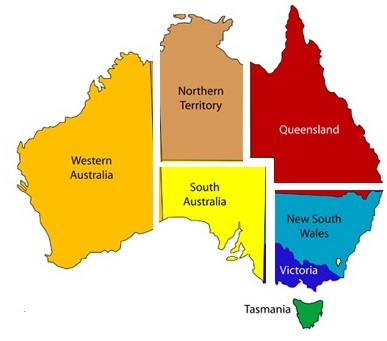 The Disunited States of Australia

“I am, you are, we are Australian”, wrote The Seekers in a beautiful expression of national identity that spans our very diverse origins. While through COVID-10 we ought to feel especially blessed to live on this remote, island nation, the experience has highlighted the structural essence of our nation like nothing else could.

As most Australians know, our country is a federation of states that were originally separate self-governing colonies, and chose to come together in 1901 to form a single country. But for most of the time since then, state divisions were more synonymous with sporting and parochial rivalries, and that was mostly all they meant to the general population. The Prime Minister would meet regularly with the Premiers of each state, argue about things like funding and GST allocation, and then all go home and continue business as usual. There were not huge discrepancies between the states in terms of their economies or other significant metrics of success.

Several years ago, I started to wonder why we even needed state governments. Does a country of about 25 million people really need three levels of government? This seemed to be a relic that had outlived its usefulness. If we were designing our country from scratch, would we do it this way? Not sure. It is a huge country, and resources and needs vary significantly from one part to another. We also may not want too much concentration of power in any one layer of government. At the end of the day, it seems rather academic, as getting rid of layers of government is nigh impossible.

And then, COVID happened, and very quickly we learned the practical implications of the different powers held by federal and state governments. We went from trading barbs over closing borders to seeing the stark difference in competence between state governments with regards their public health infrastructure, and quarantine programs.

In Victoria, we experienced a debacle of the highest order as government incompetence led to a second wave, and more than four months of heavy lockdown. Even now, despite over two weeks of zero new cases, life is nothing like the ‘normal’ of other states. We are a state traumatised, and many people are exhibiting signs of Stockholm Syndrome in their gratitude to a leader who saved us from a second wave (that he allowed to happen).Personally, I am racked with doubts as to our government’s ability to open up and also keep the virus spread in check, and fear of blanket lockdown measures that could be invoked again at any time.

Perhaps the perspective of a Victorian gives me greater sensitivity to the way the relationship between our states is now evolving. We seem to be over our second wave and ready to open up. At the same time, the tiniest spike in SA is now leading to talk of closures.

Even now, the parochialism continues. Some borders are opening, and some are not. Victoria is now included in the NZ bubble. NSW will shortly open the border, but Queensland will not. It’s not clear when WA is moving from “hard” closed borders to “soft”, but nothing approaching “open” just yet. Christmas looms large as the target date to allow free travel. Is that because so many Australians celebrate it, or because it happens a useful milestone at the end of December?

I had some interesting feedback in a discussion about the timing of border openings: “We will favour NSW for our summer holiday because they opened up sooner, and don’t feel any desire to go to Queensland any more”. While I can understand why people feel this way, it is a disturbing development. We don’t know if Queensland Premier Annastacia Palaszczuk is prioritising the needs of her state’s population over the rest of the country, or playing politics having just been returned to power in an election, or a bit of both. To paraphrase John Donne, no Australian state is an island. The policies and actions of each state impacts all of us. And delays in opening up can have interstate tourism blowback.

Looking forward to when borders do open up, and when we do have a vaccine, how will the relationships between the states and the federal government and the perceptions of Australians about the states be different? I fear that this experience has brought to front of mind the differences between the states, rather than what unites us as a country.

Perhaps this is the time for us to plan a review of the federation. How has it served us – as a nation – during this crisis? Should lines of responsibility between levels of government be shifted? And most importantly, what can we do to restore “I am, you are, we are Australian” to a statement that actually means something?